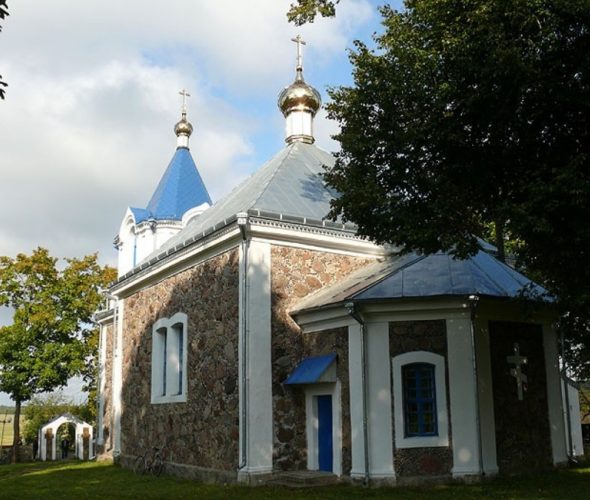 The construction of the church was carried out at the expense of funds provided by the state treasury and donations from parishioners. The church was already built in the end of 1886. The consecration of the new church in honor of the Intercession of the Most Holy Mother of God was performed by the Volozhin dean priest Anthony Adamovich in the concelebration of 4 priests, on October 22, 1870.

The clergy of the church used the land , a significant share of which was the land of the farm “Gloss”. This farm was transferred to the Holy Protection Church in 1871 by the Administration of State Property, instead of the church land that was distributed among the liberated peasants.Also in 1898, a church stone fence was built around the church with a donation of 660 rubles from parishioners. In addition to this amount, 100 rubles were added, which were sent to the needs of the church by Archpriest John, in the future St. John of Kronstadt.

On April 13, 1961, an official decision was made by the executive committe of Volozhin district to close the church. In accordance with this decision, the church building was placed at the disposal of the district executive committee. After the closure of the church, mockery of the holy objects began. For almost 30 years, the church was closed and no repairs were made in it.
The grand opening of the church after a long period of oblivion took place on June 4, 1990.

The consecration was performed by Archpriest Avenir Bilev in the concelebration of three more priests.