Skip to content
Главная » Churches of the deanery of Dolginovo

Parish of the Church of the Nativity of the Most Holy Mother of God in Kurenets village. 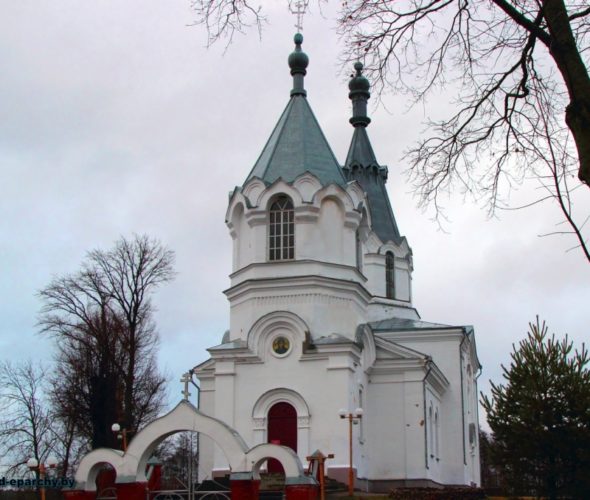 Churches of the deanery of Dolginovo

Address: Sovetskaya street/ 4, Kurenets village, Vileka district, Minsk region.
Rector: Archpriest Alexander Zavadsky (tel.: +375-1771-25927; +375-29-2549761).
The first written mention of Kuritsa and a church in honor of the Nativity of the Most Holy Mother of God dates back to 1355. Churches eventually deteriorated or were destroyed for other reasons, rebuilt, but were always located in the same place.
It is known for certain that in 1805 the name of the village was reflected in the Orthodox church: a fire broke out from a lamp left by a servant in the church, which destroyed a wooden church built on the model of the ancient St. Elijah’s church in Kiev. In the following years, the church was restored, however, a shed donated by someone was taken as a basis. This temple existed until 1866, when the laying of a new stone church was made on October 14. Funds for its construction were given by the government in the amount of 17,030 rubles.
The newly built church was consecrated in honor of the Nativity of the Most Holy Mother of God on October 16, 1870. There are 3 photos of the church, and one of the priest and his mother, taken in 1902 by Archpriest Pavel Volyntsevich. There is information about a fire in 1925, in which a church bell was cracked, the sound of which was heard within a radius of 8-10 km.
In the 1960s at the behest of the state authorities the church was closed and desecrated: crosses and domes were torn down, icons and church utensils were taken to the village of Kosuta, the bells were removed and sent for melting, and the church itself was given over to storage for grain, flour and fertilizers. Later in the late 1970s there was a fire that significantly damaged the walls of the church and destroyed the remaining roof. The church stood in this state until restoration work began in March 1990 under the leadership of Priest Ioan Krupko. The work was completed by June 26, 1993, when Metropolitan Filaret performed the rite of consecration of the church in honor of the Nativity of the Most Holy Mother of God.
The temple in Kurenets today is the largest Orthodox church in Vileyka district: its height to the cross is 37 meters, the height inside the church to the ceiling of the dome is 16 meters, the area of the interior of the church is 270 square meters, the internal volume of the church is more than 2000 cubic meters.