The parish of the church of the Blessed Prince Alexander Nevsky in Turets-Boyari village. 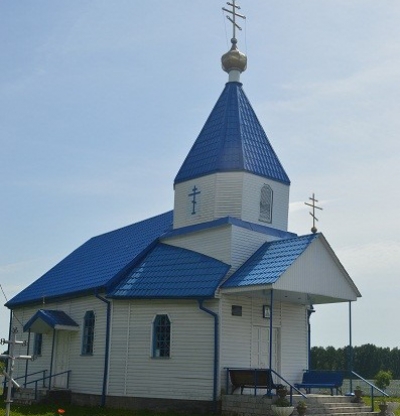 The parish is under the pastoral care of Archpriest Nikolai Peshko, the priest of the church of the Holy Life-Giving Trinity in Markovo (tel.: +375-29-6305027).

In the clerical register of the Holy Trinity Church in Markovo village , we find some information about the cemetery chapel in Zapolyaki village. We know for sure that it was built at the beginning of the 20th century. The chapel had its own church utensils. There is one throne and the church wa consecrated in honor of the Holy Prince Alexander Nevsky. In the early 60s, the chapel was closed, and later it was dismantled by students of Berezinsky Vocational School.

In the beginning of the 90s of the last century the construction of the new building had a difficult time. At the expense of building material from Prudi factory , the foundation is filled in and a wooden log house is installed. But due to financial difficulties, the construction was postponed, and they returned to the church only in 1999. Spiritual care and construction were entrusted to the priest of the Holy Trinity Church in Markovo, priest Nikolai Peshkov.

On April 7, 2004, Antimins was consecrated by Metropolitan Filaret, and soon the first Divine Liturgy was held. In the same year, Archpriest Alexander Trotsky, dean of the Molodechno district, consecrated the temporary church with a priestly rank.

The complete completment of the construction lasted for another 10 years. On October 4, 2014, his Eminence Metropolitan Paul consecrated the church in honor of the Holy Prince Alexander Nevsky. The church is still attached to the Church of the Holy Life-Giving Trinity in Markova village.