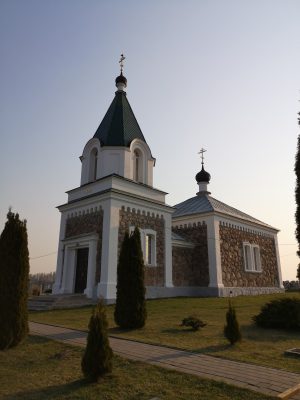 Churches of deanery of Horodzilovo
Reading 2 min Published by 15.03.2022

According to the second section of the Polish-Lithuanian Commonwealth in 1793, together with other settlements, Gorodilovo became a part of the Russian Empire and was a part of the Oshmyansky povet of the Vilenskaya province. At that time, through the efforts of Kotsel, a wooden St. George’s Church was built. In 1866, instead of the wooden St. George’s church, the Gorodilovsky parish received a new church, consecrated in honor of Joseph the Betrothed. The building, made of local rubble stone and brick, framed with white lime trim, is a monument of architecture of the retrospective Russian style. The church is located in the center of the village on a high place near the ancient cemetery.

In 2016, the church turned 150 years , throughout the entire time the church was not closed, prayer did not stop in it.
A great contribution to the history of the Gorodilov St. Joseph church was made by its prior Archpriest Alexy Mayevsky. The fact that he served in this church for 61 years, of which he was the dean of Molodechno for 50 years, speaks for itself. During the Great Patriotic War, Father Alexy raised funds to help Soviet prisoners of war, saved dozens of people from imminent death. After the death of Alexei Mayevsky, from November 1979 to 1986, Archpriest Ioan Mitko served as a prior of St. Joseph’s Church. Since 1998, Archpriest Ioan Goncharuk has been serving in St. Joseph’s Church in Gorodilovo village.